The Fitzwilliam Museum possesses a unique, diverse and generally extremely high-quality collection of Asian art. Its Chinese holdings include exquisitely carved jade items, mostly bequeathed by Oscar Raphael in 1946; ancient ritual bronzes; nearly 500 snuff bottles in various materials; Chinese fans made for domestic use as well as for the European export market (from the Messel-Rosse collection, 1985); imperial lacquers and glass; textiles; and a large quantity of imperial and export porcelain.

In terms of Korean art, the Fitzwilliam has what is generally considered to be the best collection of Koryo celadon outside of Korea, thanks to gifts by Godfrey Gompertz in 1984 and 1989. In 2010 and 2014, Prof. Peter H. Plesch and his wife Mrs Gerta R. (Traudi) Plesch gave the museum 43 pieces of pottery, bronze, lacquerware and blue-and-white porcelain, which has significantly enhanced and expanded our Korean holdings.

The arts of Japan are variously represented: the Museum has more than 500 netsuke, mainly given by Charles Brinsley Marlay (1831–1912) in 1912 and by Dr Roy Hull in 2008. In addition, Marlay donated 500 tsuba (decorative sword fittings), some Japanese bladed weapons, inro (cases for holding small objects) and lacquer. With the help of the Glaisher Fund, the Museum was able to purchase 314 Chinese and Japanese ceramics from the Frank Brangwyn collection in 1934. Thanks to several generous loans by the Jenyns family (1984, 1986 and 1989), the Fitzwilliam’s Kakiemon holdings are now the best in the UK. In the past decade, Japanese export and studio porcelain has been donated by Prof. David McMullen, Dr John Shakeshaft and David King, making our Japanese ceramic collection more representative. 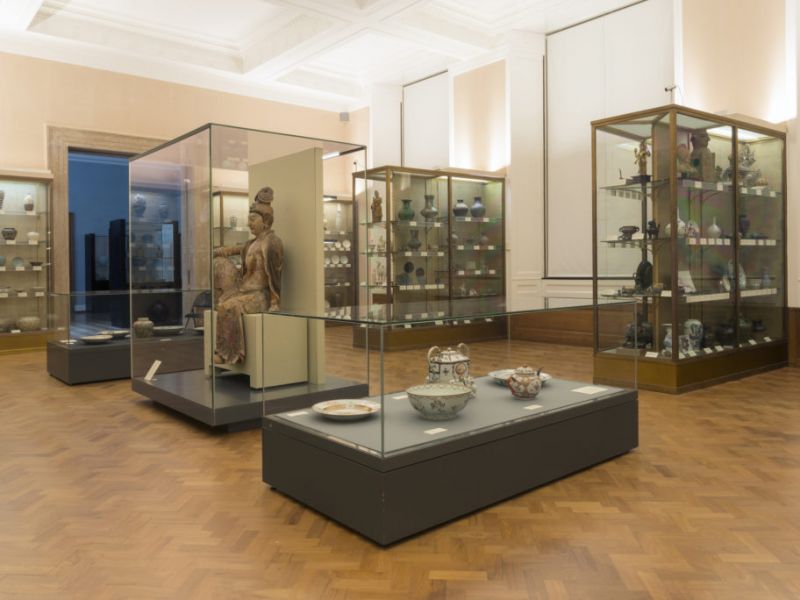 Gallery 28: Arts of the Far East