Clare Cambridge pays tribute to her friend and colleague...

Hannah’s parents were Danish, but she grew up in Hong Kong. She spanned three cultures: Scandinavian, British and Chinese. This gave her an awareness of the strengths and habits of three very different societies. Years later, when working at the Fitzwilliam, her varying skills would come to the fore: she was good at dealing with people, and sometimes surprised Chinese visitors by giving them directions in their own language. She was always willing to do some on-the-spot interpreting, while her Scandinavian love of cleanliness meant that she put together the detailed notes which formed the Visitor Services booklet on how to clean the galleries.

Hannah had worked at the Fitzwilliam since 2012, and she also qualified as a Blue Badge guide almost as a hobby, and then began doing bespoke tours for Chinese visitors to Cambridge. But her background had been as a high-level PA in various businesses.

Hannah was fluent in Cantonese and other Chinese dialects, and had studied the language at university level. Her family was academic – her father was a professor at the University of Hong Kong, and her mother, Inger Kvan, had taught history at one of the best schools in Hong Kong.

Hannah’s first job when she left school was as a nanny to two small children (which she loved), but after her university education, she entered the business world. For some time, she ran the Esso office in Beijing. During the 1980s she met a businessman linked with the film director Bernardo Bertolucci. He invited her to act as their China expert in the production of The Last Emperor, about the life of Pu Yi, who became emperor of China as a toddler in 1908. Bertolucci was planning to film in the Forbidden City and wanted Hannah to act as interpreter and local advisor. Excited by the idea, she phoned her father about the project, but Professor Kvan gasped in horror. ‘Hollywood is not academic – it is not intellectual! You must not do this!’ – and so Hannah declined Bertolucci’s offer. A day later, she decided to ignore her father’s caveat, but it was too late. Later, back in Hong Kong, she worked at the Australian International School.

Then, during the 1990s, her mother tired of Hong Kong and decided to move to Cambridge. When she fell ill here, Hannah ditched everything to come and care for her. After her mother recovered, Hannah stayed with her and took a temporary job as secretary to the then Master of Christ's College, Professor Alan Munro. When that job ended, Hannah moved to the Old Schools and later worked as PA for a group of women professors connected with WiSETI, the Women in Science, Engineering and Technology Initiative.

Hannah had a caustic sense of humour, and was famous for her verbal backhanders, which were often preceded by a cry of ‘Hey!’: ‘Hey! If you polish up your halo any more it’ll fall off and crush you!’ she once said, when I was accusing my neighbours of polluting my recycling bins. These backhanders arose when she felt there was another side to the story, an alternative viewpoint about the supposed malefactor. Hannah had been bullied at school for being Danish, not British, and knew what it was to be an outsider.

As well as her work, she continued to tailor her life around her mother, who was in her early eighties when her daughter came to join her. Hannah cared for the old lady so well that Mrs Kvan lived for another fifteen years, to the ripe old age of 98. Caring for her mother was an example of how dedicated Hannah was: she visited her twice a day, once before work and once for several hours after. Her mother did not like food in her care home, so Hannah bought and prepared alternative meals for her on a daily basis. After meals, there was a discussion about some book of philosophy or a religious text which Mrs Kvan would have read. After this would come a game of Scrabble or chess, which Mrs Kvan always won.

Mrs Kvan died at the end of 2014, and two years later Hannah decided to move to Ely. It was ironic that the city was closely linked with Oliver Cromwell, for one of her father’s great heroes was King Charles I. One day last January, she asked me to meet her at a surgery not far from Cromwell’s house. When we left it was obvious that she was worried, so I deflected the conversation onto Oliver Cromwell and how she might get a better opinion of him now she was living in Ely. ‘We’ll go and tour his house one day’, I suggested, but we never did …

It was a tribute to Hannah that on the day her death was announced some staff were in tears, and people from every department expressed regret.

Music, dancing and a Chinese lion at spectacular launch of two-year Olympics programme

Hannah Kvan in the Fitzwilliam Museum 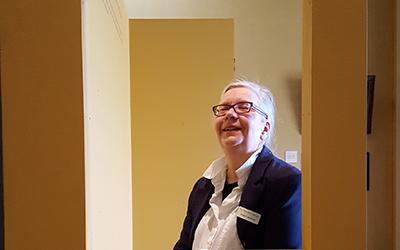