The walls of Hardy’s study, where I painted him, were piled to the ceiling with books, mostly of a philosophical nature, and many of them French...
Augustus John, Chiaroscuro, 1952.

Augustus John had met the octogenarian English novelist and poet Thomas Hardy through T.E. Lawrence – Lawrence of Arabia – in September 1923. In the following weeks he made several visits to Max Gate, the house that Hardy had designed and built for himself in Dorchester, Dorset, to work on this affectionate and admiring portrait. The study in which Hardy is shown is that in which he wrote many of his most celebrated works, including Jude the Obscure (1895), the manuscript of which is in the Fitzwilliam. The opening page, with Hardy's corrections, can be seen left.

In an article written for the monthly review Horizon in the 1940s, John recalled the harmonious relationship that developed between artist and writer:

'An atmosphere of great sympathy and almost complete understanding at once established itself between us, though the veneration in which I held Hardy impeded to some extent the natural expression of my response to his quite lovable personality ...'

John recorded in his memoirs that 'Hardy himself was, physically, not of monumental build, though he had a fine head'. Yet in the portrait the artist has done his best to endow the old man with a certain stature.

We are made to gaze up at the novelist from a low viewpoint, a position that perhaps reflects the veneration John spoke of. The ‘fine head’ sits atop a pyramid of grey tweed, Hardy’s suit, which takes up half the canvas and suggests a robustness at odds with his old age. The enormous thumbs resting on the lapels of his jacket direct our gaze up to the face, with its wide, rheumy eyes, eyes that ignore us, that look out to the right, brows and lids raised as though the great man is pursuing a thought.

Of all the many other portraits in the Fitzwilliam Museum, one is perhaps reminded most of Archbishop Laud [2043], painted c.1635 by Sir Anthony Van Dyck. The handling of the paint is of course quite different in each painting: John’s sketchy, spontaneous brushwork contrasts with Van Dyck’s meticulous finishing. And John's Hardy seems like a warmer, more approachable character than the rather dyspeptic-looking Archbishop. But the two artists, separated by three hundred years, have both endowed their ageing, moustachioed sitters with similar airs of dignity and intellectual authority. The brightness of the eyes, with their high arching brows, is emphasised in both. The hands are given prominence, and both men are given added stature by the bulk of their clothes.

Sydney Cockerell,the director of the Fitzwilliam between 1908 and 1937, and a close friend of Hardy and his wife Florence, acquired this portrait soon after its completion, a purchase that caused the novelist much delight. Florence wrote to Cockerell after its acquisition, telling him of Thomas’ pride:

Bt. from the painter for the Fitzwilliam Museum shortly after it was painted 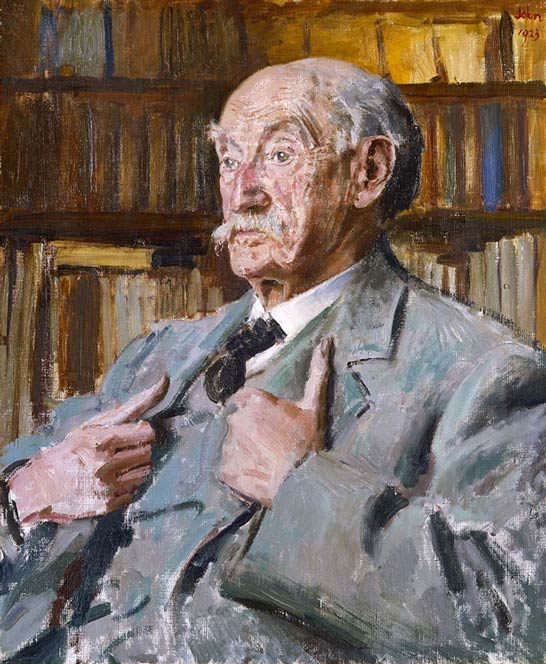