This silver tetradrachm – four-drachma piece – from the Greek colony of Naxos on Sicily is one of the masterpieces of ancient coinage.

Greek settlers, some of whom hailed from the Aegean island of Naxos, first arrived in Sicily in 735 BCE. They founded a new city on the north-east coast and named it after their island home. As well as being the earliest Greek community on Sicily, Naxos was probably also the first to mint its own coins.

The obverse – head’s side – of the tetradrachm depicts Dionysos, left, the popular Greek god of wine and, more broadly, of culture. The Romans worshipped him as Bacchus and usually depicted him as a smooth-skinned, androgynous youth, his flowing hair wreathed in ivy. He is seen thus on a small second- to first-century BCE bronze in the Fitzwilliam, right [GR.119.1937]. The Greeks, however, pictured him as the maturer, more masculine figure we see on this coin.

As a god of wine, Dionysos was an appropriate patron for the colony of Naxos, whose economy was based on its vineyards. But he also provided the settlers with a link back to their Greek island heritage, for it was on the island of Naxos that Dionysos had met his mortal bride, the Cretan princess Ariadne, who had been abandoned there by the Athenian hero Theseus. The pair can be seen reclining together on a couch, on a sixth- century Athenian black-figure vase in the Fitzwilliam, left [GR.27.1864].

On the reverse of the coin, a satyr squats on his haunches and lifts a kantharos – a large wine cup – to his mouth. Satyrs were the wild, drunken followers of Dionysos. This one’s head, with its sharply pointed ear and thick shaggy hair, suggests well his bestial nature, as does the tail that sticks out behind him. Otherwise, his body is that of a finely toned athlete.

The naturalistic depiction of his muscles, the frontal view of his right foot, the sense of balance as he puts his weight onto his left arm: these subtleties reflect the kind of developments being made in large-scale sculpture in Greece at the time.

The coin was minted to mark an important event in the history of the Sicilian colony of Naxos. In 476 BCE, the Greek population had been forced out of the city by the Syracusan tyrant, Hieron. When he was deposed in 461 BCE, the Naxians regained their homes. This coin, which bears the legend Naxion – ‘of the Naxians’ – marks this return, a confident claim to their city that invokes both its mythic past and its current economic strength.

Four drachma piece from the Greek colony of Naxos on Sicily 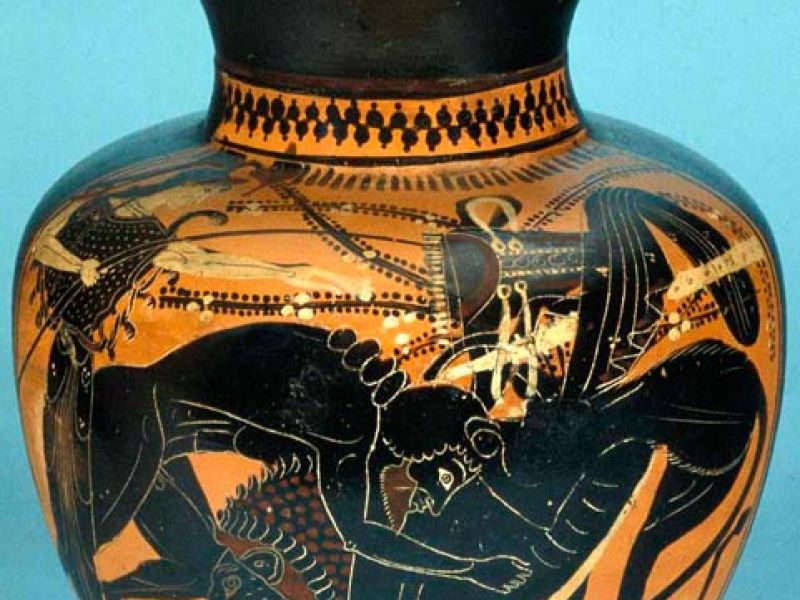 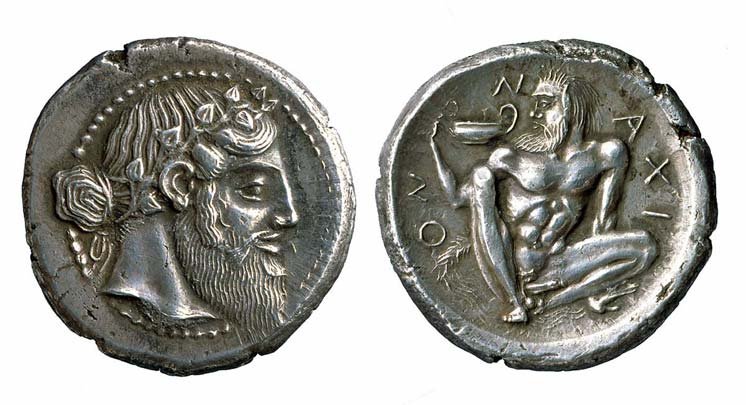