The painter of these two leaves, a Frenchman known as Master Honoré, is acknowledged today as one of the greatest book illuminators of the middle ages. Little is known about his life, but he appears to have enjoyed a successful career at the turn of the thirteenth century. He is listed in the registers of Paris for 1292, as paying considerably more tax than his fellow illuminators, and he is known to have decorated books for King Philip IV the Fair, who ruled France from 1285 to 1314.

The leaves in the Fitzwilliam come from a text called La Somme le Roi, a series of moral lessons written in 1279 for Philip III of France by his confessor, the Dominican friar Laurent. By the fourteenth century, this book had been translated into several languages and spread throughout Europe. In the fifteenth, century William Caxton printed an English translation, The Book Ryal or The Book for a Kyng.

The attribution of these miniatures to Honoré is based on their close similarity to those in a breviary – a book containing the Divine Office – thought to have been painted by him for Philip IV. A page from this volume, now in the Bibliothèque Nationale in Paris, can be seen left [Paris,BN.MS Lat.1023 fol.7v]. The figures have the same slender, curvilinear bodies, the same curly hair and beards as those on the Fitzwilliam's pages.

In both books the artist masterfully evokes, by subtle shading, the shapes of the bodies beneath the drapery that hangs upon them. So we sense the motion of Joseph’s right leg thrusting forward as he tries to escape the amorous attentions of Potiphar’s wife, left. We see the tension in Moses’ body as he stands between the brawling Egyptian and Jew, right.

Detailed guidelines about the illustrations that were to appear in editions of La Somme le Roi were formulated early on in the book’s history. Each edition was to contain fifteen sets of pictures, seven of which were to illustrate a virtue and its contrasting vice. The two leaves in the Fitzwilliam deal with Equity and Felony, and Chastity and Luxury.

Both the Virtues are depicted as elegant females. Crowned, they hold emblems and trample down beasts. Equity, left, stands upon the back of a wolf that snarls resentfully up at her. Chastity, right, has subdued a malevolent-looking hog.

Equity is accompanied on the same page by three Old Testament scenes. Next to her, in contrast to her poise, Cain fells his brother Abel with a blow to the head from a spade. The word 'Felonnie' is written above in red.

Immediately beneath Equity, Noah’s Ark is represented in cross- section. Noah seems depressed, resting his head in his hands, a downcast expression upon his face. But surrounding him is an impressive menagerie: an eagle, cock, hen and parrot, then a dog and a cat, and below a hare, a stag, a ram, a lion, a goat, a bull and a boar.

Next to the Ark, Moses intervenes in a brawl between two men who make to attack each other with clubs.

Chastity is balanced on her page by another allegorical female figure, Luxury. She wears a blue cloak lined with scarlet and holds in her hands a white cloth and a pair of manacles.

Beneath Chastity, the Old Testament heroine Judith plunges a sword into the neck of the Assyrian general Holofernes as he sleeps. Having seduced him with her beauty but not slept with him, hers was a suitable example of chaste behaviour.

Another example of sexual temperance is shown next to Judith and Holofernes. This time male restraint is celebrated as we see the young Joseph shunning the lustful advances of Potiphar’s wife. Furious at this rejection, the woman would later accuse Joseph of attempted rape. Here we see her grabbing the cloak that she will use as false evidence against the young man.

A further eleven leaves decorated by Honoré, from the same book, are held in the British Library in London.

A postcard from David and Angel Gould to RAymond Lister 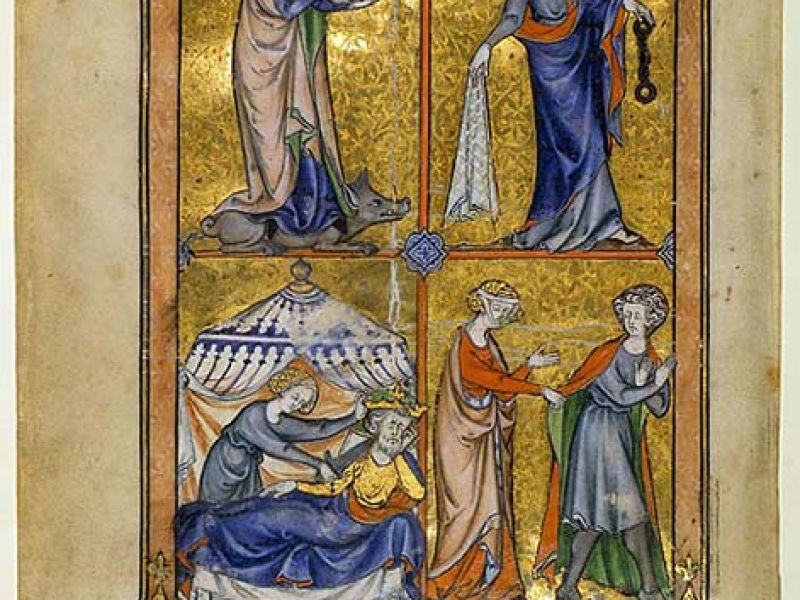 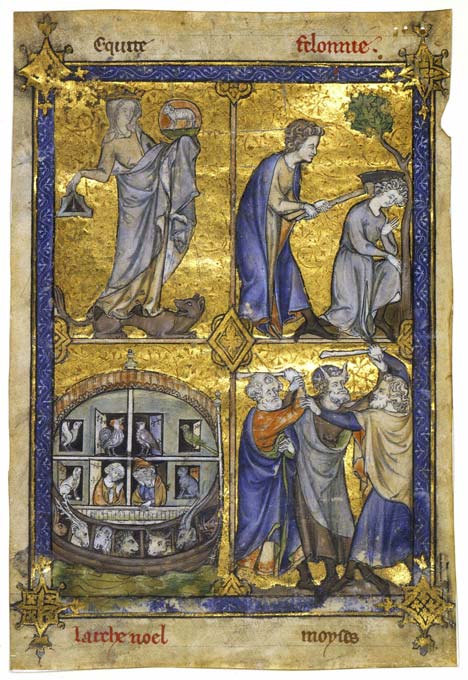