This sensuous early work by the French artist Eugène Delacroix was painted in Paris, and his model was most likely a native of that city. But his imagination has located her in a far more exotic place. A narghile (water smoking-pipe) stands beside the divan on which she lies. The scabbard of a yatagan (a Turkish sword) lies obliquely across the bottom of the canvas (detail left).

We are deep in the Orient – an exciting, erotically charged world of harems and hashish – and the lady is an odalisque, the concubine of a sultan, a woman kept for the purposes of male pleasure. Although Delacroix painted several similar scenes in the 1820s, he did not have direct experience of the East until 1832, when he was invited to join a diplomatic mission sent by the French King Louis-Philippe to the sultan of Morocco, Moulay Abd-er Rahman.

The artist has established a powerful feeling of intimacy here between subject and viewer. Our odalisque, naked but for gold anklets and a necklace, lies on her back in a relaxed and languorous pose. She meets our gaze, her lips slightly parted, her eyes half closed. Is the viewer cast as the lover who has recently risen from the couch? Is that your scabbard lying on the floor?

The woman's skin almost seems to glow against the dark blue curtain behind her, but her flesh is no more clearly defined than the sumptuous red fabric or the ruffled white sheet on which she lies. Delacroix is not concerned here with details of musculature or intricate folds of drapery. It is the atmosphere within this room, produced by colour, light and shadow, that is important. The loose drawing and broad brushstrokes add to the feeling that we view the woman through a haze. There is a sense of intoxication.

Delacroix is revered today as the great painter of the nineteenth-century Romantic movement in France, and his works are distinguished by their emotional intensity and passion, as well as their striking colours and the loose handling of the paint. As subjects, he was interested in the exotic, the dramatic and the macabre. He is often compared, for his temperament and his style, to the British poet Lord Byron, whose works inspired many of his paintings.

Delacroix was largely self-taught. He studied the works of the Old Masters in the Louvre, many of which had been recently brought to France by Napoleon, the booty of the emperor's European campaigns. There he became familiar with the works of Titian and other sixteenth-century Venetian artists. Venus and Cupid with a Lute Player, a superb reclining nude by Titian in the Fitzwilliam, left [129], provides an interesting comparison with Delacroix's Odalisque. While there are several formal similarities between the two, one is struck by Delacroix's far looser approach to the depiction of the human figure.

Delacroix's reaction against the classical ideal taught by the French Academy led to severe criticism from his contemporaries, and initial rejection by the artistic establishment. His great rival, the immaculately classical Jean-Auguste-Dominique Ingres, once dismissed him as 'an apostle of ugliness'. Ingres himself painted a celerated Odalisque in 1814. A lithograph of this work in the Fitzwilliam, left [P.26-1942], suggests the contrasting outlooks of the two artists.

After returning from North Africa, however, Delacroix found himself more in demand by the establishment, and throughout the 1830s he received several commissions to paint murals in public buildings. The Fitzwilliam owns a sketch [2033] for his ceiling frieze representing 'Justice' in the Palais Bourbon in Paris, where French Parliamentary Assemblies have sat since 1832. 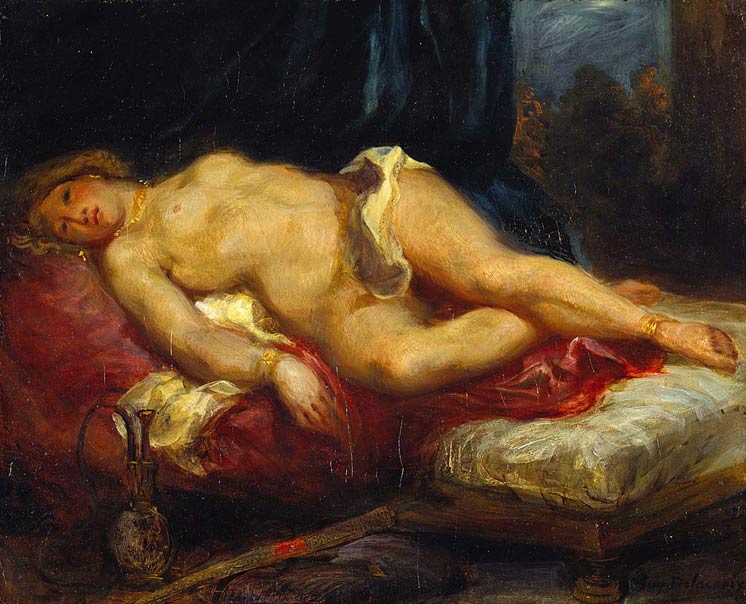