Call it, if you like, a transcendental conception; a landscape of the imagination ...

The painting about which Paul Nash wrote these words – Landscape of the Vernal Equinox – is very close in date and similar in appearance to November Moon. Both works share much of the same imagery. Both were created in the garden of the same house, Sandlands, in Boar’s Hill, Oxfordshire, that belonged to Nash’s friend Hilda Harrison. And though based upon a real landscape, the elements of both paintings go beyond the observable, natural forms of the garden. The colours, the objects and forms are interpreted through the filter of Nash’s imagination.

The phenomenon that has caught the artist’s attention in the Fitzwilliam's painting is the appearance of the moon in daylight on a clear autumn evening. It is where the sun should be, high and full in a crisp, blue sky. There is a chill to the scene, a premonition of winter. An expanse of pink in the sky marks the presence of the setting sun. An evening mist is seen creeping in.

Nash described Sandlands as having 'a charming neglected garden, very interesting in forms and colours', and the impressionistic jumble of colours in the centre right of the canvas – pale pink, khaki, and a variety of browns, greys and blues – suggests both this charming neglect and the change in season.

Further to the left, more coherent forms emerge. A carefully laid-out avenue of tall, leafy cypresses contrasts with the autumnal flora. As an evergreen, the cypress has long been connected with immortality, and this contrast between the living and the dying is strongly felt in November Moon. But the tree also connotes death itself: in Roman times cypresses were connected with the Underworld and were used in funeral rites. To this day the tree is commonly found flourishing in cemeteries.

In the foreground, on a ledge above the garden, lie two uprooted plants. On the left is a toadstool, upturned to reveal its pale pink flesh and gills. Mushrooms appear in several of the paintings Nash made in this period in Boar’s Hill, and it is likely that they symbolise death. It has been suggested that the word ‘fungus’ derives from the Latin funus ago, meaning ‘I conduct a funeral'. The yellow, trumpet-shaped plant next to the toadstool has been variously identified as a chanterelle mushroom or a convolvulus flower. Nash does not paint the plant in enough to detail for us to make a secure identification.

High above the garden and its plant life floats the moon that gives the painting its title. It has been suggested that it represents fertility, but like the mushroom and the cypresses, the moon in art often carries darker connotations. In medieval representations of the Crucifixion, the moon often appears on the left, ill-omened, side of the cross. We see it thus in an early thirteenth-century Psalter in the Fitzwilliam, left [MS.12.f.12r].

Nash was fascinated by the idea of death and rebirth in nature, in the changing of the seasons, and there is a general intimation of mortality in November Moon: a sense that the end of nature's cycle has been reached. The cypresses will survive, the garden will bloom again, and the mushrooms sprout once more – but for now the cold moon and the autumn colours hold sway over the landscape.

There is perhaps also an element of autobiography here. Although by no means an old man when he painted his Boar’s Hill series in the early 1940s, Paul Nash was in poor health. In a letter to the art critic Herbert Read, he described this period of his life as his ‘last phase'. He sensed that he was reaching the end of his own creative life, and used seasonal imagery to express this, much like his contemporary, the writer D.H. Lawrence, who was dying of tuberculosis when he wrote his poem 'The Ship of Death'. It begins:

Now it is autumn and the falling fruit / and the long journey towards oblivion ...

And it is time to go, to bid farewell / to one's own self, and find an exit / from the fallen self. 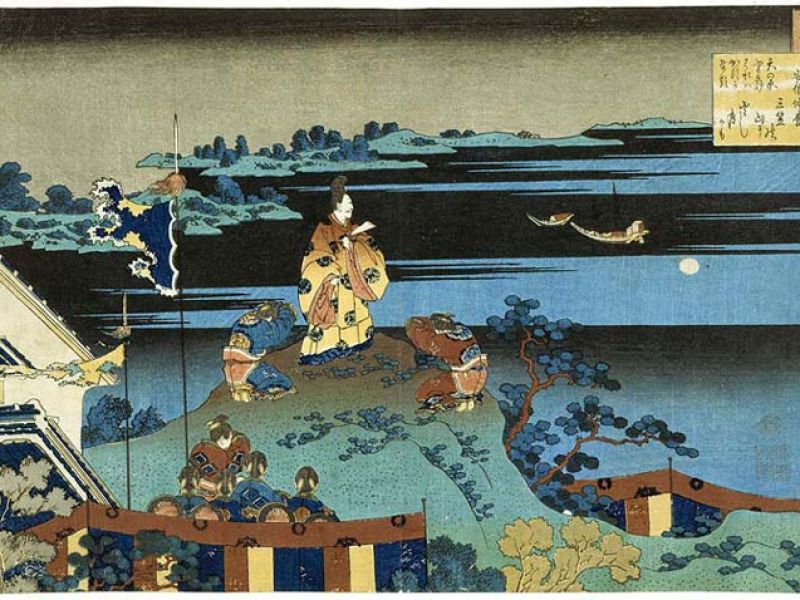 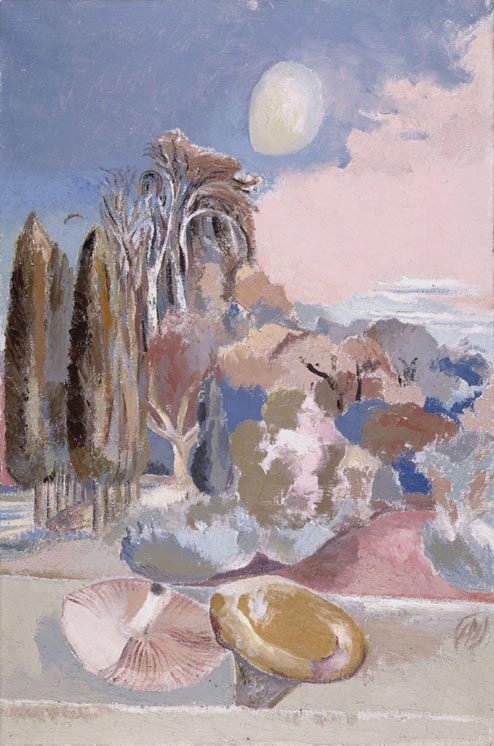