In 1877 a medal was awarded to this man, Antonio Rodriquez de Sardinha, a naturalised citizen of New Zealand, for his bravery in combat against the Maori in the First Taranaki War in 1863 and 1864. It was one of only 23 New Zealand Crosses awarded. At his death in 1905 the medal was infamously sold and then passed through the hands of a number of collectors before coming to rest with Lester Watson in 1927. It, with the rest of his collection of military medals, came to the Fitzwilliam Museum in 2006, where it was catalogued and put online. Thereafter, three different descendants of Rodriquez's family learnt of its existence there. The following virtual exhibition is based on the history of Rodriquez and his medal that they and the Museum have been able to assemble, and follows this unique story from Rodriquez's arrival in New Zealand in 1852 through his combat service and eventual death to the researches of his family members in the present day.

Photograph of a group of the Taranaki Mounted Volunteers, 1863 or 1864 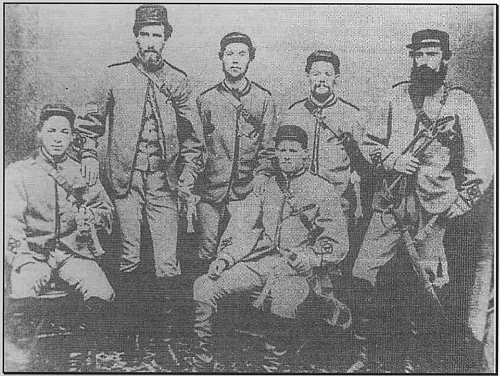