Between East and West: Influence and Change in Coinage

Coinages have long been influenced by the movement of peoples, by cultural interchanges, and by trade. Innovations in coinages, from ancient Greece to twentieth-century India, reflect these influences and exchanges. At times these have led to radical changes in the monetary system, but in other cases newcomers have seamlessly adopted the established local currency.

This virtual exhibition, based on an exhibition in the Fitzwilliam Museum from April to June 2001, explores the impact that Western concepts of money have had upon Asia in particular, from the time of Alexander the Great and before, up to the post-colonial and modern coinages of the present day. 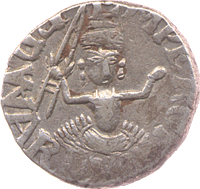