Origins of the Afro Comb

Hair and grooming have always played an important role in the culture of Africa and the African Diaspora. The traditional African comb, or pick, has played a crucial role in the creation, maintenance and decoration of hair-styles for both men and women.

In many African societies, ancient and modern, the hair comb symbolises status, group affiliation, and religious beliefs, and is encoded with ritual properties. The handles of combs are decorated with objects of status, such as the headrest, human figures, and motifs that reference nature and the traditional spiritual world.

In the twentieth century, 'afro' combs have taken on a wider political and cultural message, perhaps most notably in the form of the 'black fist' comb that references the Black power salute.

By looking at archaeological records of burials, and through recording oral histories in modern societies, it is hoped that the project will provide a much better understanding of the status of this iconic object and the spiritual and societal status it can hold. The project aims to trace the history and the meaning of the African hair comb over a period of 5,500 years in Africa, through to its re-emergence amongst the Diaspora in the Americas, Britain and the Caribbean. 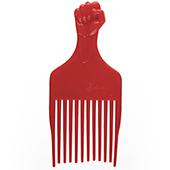