The Fitzwilliam Museum's textile collection comprises mainly embroidered examples and includes an important holding of over 400 samplers, both English and continental, spanning several centuries, and displaying a wide range of needle techniques. The sampler collection is particularly rich in dated seventeenth-century English work thanks to the bequest of Dr J.W.L. Glaisher (d. 1928), and in continental work due to the bequest of Mrs H.A. Longman (d. 1938). Other examples of English embroidery in the collection include caskets, panels, pictorial raised work, and a variety of small objects such as purses, cushion covers and costume accessories. There is also a collection of needle and bobbin lace dating from the seventeenth century onwards and originating from the major lace-making centres of Italy, France and Belgium, as well as England.

Other significant holdings are of Greek Island and Ottoman embroideries, most of which were given by George de Menasce in the 1940s. De Menasce and Mrs F.H. Cook also gave some fine Italian and Ottoman woven silks and velvets. The extensive Study Collection of Chinese and Japanese textiles, mainly of fragments but with some complete objects, came to the Museum thanks to the generosity of Soame Jenyns (d. 1976).

As well as eight small twentieth-century Aubusson tapestries, bequeathed by Mr and Mrs George Woodbridge through the American Friends of Cambridge, the Museum holds larger Flemish and French tapestries from the mid-sixteenth to the mid-eighteenth centuries, and five from Norway of the seventeenth century. Just over fifty saddle rugs were given in 1942 by the twin brothers Major R.G. (1881–1945) and Colonel T.G. (1881–1960) Gayer Anderson, who collected them whilst on duty in the Middle East. However, the large collection of Persian, Turkish and central Asian rugs is the result of many gifts, bequests and purchases, the rugs originally being used as floor furnishings for the museum.

Today, due to their environmentally sensitive nature, the rugs, as well as almost all the other textiles, are rarely on public display, but objects can be viewed by prior appointment.

The Fitzwilliam Museum’s world-renowned fan collection, begun in 1836, includes exquisite examples of all periods, forms, materials and techniques from around the world. The core of the collection is the Messel-Rosse Fan Collection of Colonel Leonard C.R. Messel, on display in the the Sasakawa Fan Gallery since 1987. It is now augmented by the important Lennox Boyd Collection, acquired in 2015.  There are more than 1,000 fans, unmounted fan leaves, and fan cases in this encyclopaedic collection, which has significant art-historical value in its own right, as well as in its relationship to other of the Museum’s masterpieces of many periods and geographies, such as Italian Baroque painting and Chinese ceramics. 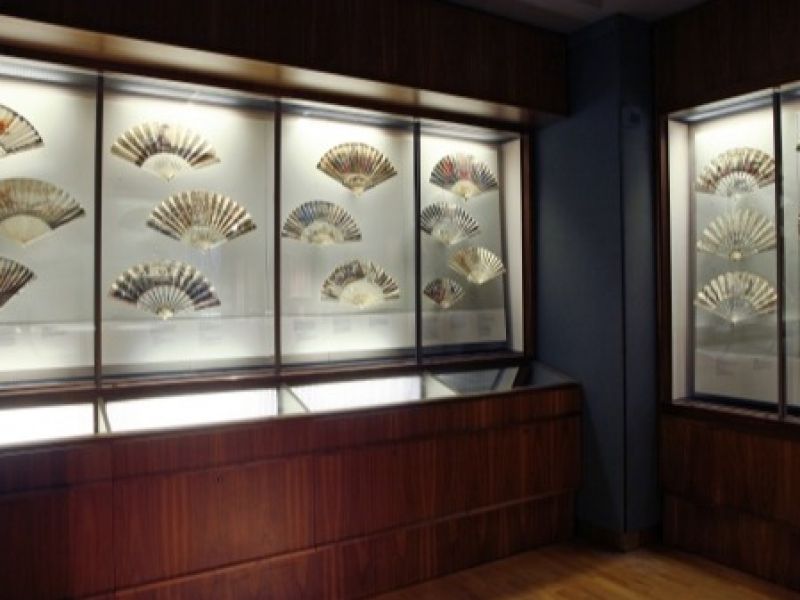 A pair of shoes