Aelbert was the son of the celebrated Flemish artist Dieric Bouts. Throughout his long life, he never quite matched his father in the quality of his painting or the originality of his compositions, but he still enjoyed a successful career working in the style that Dieric had pioneered. His pictures are populated by the same strangely dour figures that inhabit his father’s work.

The subject of the Transfiguration of Christ was long established in art by the time Aelbert painted this panel and there is much that is traditional in his treatment here: the arrangement of the three apostles at the bottom of the picture, the frontal stance of Christ flanked by Elijah and Moses. But Aelbert was not aiming for grand spectacle. His is a quiet but effective rendition of one of the most mystical moments in the life of Christ, the only real example of visionary experience recorded in the Gospels.

Christ dominates the scene, clad in a white robe, a fiery halo around his head. He stands on a rocky outcrop that represents ‘the holy mountain’ Tabor. His right hand is raised in a gesture of blessing and he stares solemnly out at the viewer.

To Christ's left, emerging from a cloud, Moses holds the Tablets of the Law, the text of the Ten Commandments given to him by God on Mount Sinai. On the other side is Elijah, who, like Moses in the Old Testament and the apostles here, experienced a vision of God upon a mountain top. He holds a scroll, the text of which is illegible.

At the foot of the mountain John, Peter and James shield their eyes from the apparition. Aelbert has not included the blinding light referred to in the Gospel accounts of the Transfiguration, but he implies it in the apostles’ reactions.

In the background, on the viewer’s right, St George rears up on a white horse, brandishing his sword at a serpentine dragon, watched by the princess whom he is about to rescue. On the other side of the painting, in the distance, Christ is shown standing beside the Sea of Galilee, calling the fishermen, James and John.

So Christian faith and virtue, past, present and future, is represented in this one panel. In Moses and Elijah we see the Old Testament forerunners of Christ. In Jesus, acknowledged by God at the Transfiguration as his 'beloved Son', we see the Incarnation, God as man. Peter, James and John represent the apostolic successors who will spread Christ’s teaching immediately after his Ascension, while St George is a representative of the martyr saints whose blood will bear witness to their message in the early years of the Church.

Meanwhile the steady eyes of Christ stare out into the immediate present, involving the spectator in this sacred history.

(?) Francis Radclyffe-Livingstone-Eyre, styled Earl of Newburgh, to his second son Francis Newburgh, styled 8th Earl, who gave it to Father Bostock, Catholic priest of Leicester; the latter's housekeeper brought it to Lincoln, where it was bought by the donor from a dealer 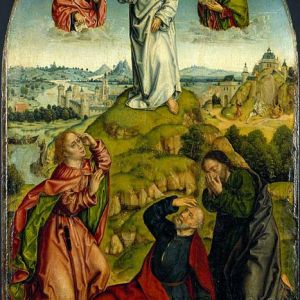 The Tombs of the Sultans near Cairo - Art print