This small but forceful head is a fragment from a statue of one of the most important monarchs of Egypt’s Twelfth Dynasty. It is remarkable for its individuality, its suggestion of humanity as well as absolute, divine power.

Amenemhat III here wears the royal nemes headcloth, made of striped linen and bound tightly round his head. On his brow is the uraeus – the cobra symbol. This was used to represent many goddesses, perhaps most frequently Wadjet, protectress of Lower Egypt. Here it probably also represents the eye of the sun god Re, protector of the king.

In ancient Egypt, the king was not only the representative of the gods on earth, he was the living embodiment of the deity Horus, whom we see, left, as a child with his mother Isis in a bronze dated between 715 and 525 BCE, in the Fitzwilliam E.122.1954.

Just as Horus had avenged his father Osiris by vanquishing his evil uncle Seth, and saved the lands of Egypt from disorder and chaos, so the king maintained the universal order – maat – and oversaw the continued good government of the country, ensuring harmony between the two lands of Upper and Lower Egypt.

Though small, the sculpture manages to convey the great power of the individual represented. The king's eyes look down as though from an elevated position, his mouth is determined and strong. The dark green limestone, dappled with lighter fossils, gives him a distant, otherworldly appearance.

But the sculptor here also brilliantly suggests the fleshly qualities of Amenemhat. His ears are large and protruding, lines run from his nose to the corners of his mouth, the lips are full and prominent, and there is a sense of the bone structure beneath the skin. This expressive individualism contrasts strongly with the idealised features of, for instance, King Nebhepetre Mentuhotep (reigned 2055–2004 BCE), seen on a fragment of a limestone relief in the Fitzwilliam collection E.GA.3143.1943.

But while the modern viewer might imagine that the statue is a faithful reproduction of the king's actual features, this is unlikely. Egyptian portraiture was concerned more with presenting the idea of a king, than with any facts about his physical appearance. Facial lines, for instance, might suggest wisdom through age. Rolls of fat on statues of private individuals might indicate wealth. This portrait of the king is psychological rather than realistic.

The Fitzwilliam also owns the head from a colossal granite statue of Amenemhat III’s father and predecessor, Senworset III E.37.1930. Though considerably more damaged than the smaller sculpture of his son, we can discern in this a similar attempt to suggest the naturalistic structure of a human face as well as the power of a divine king. The heavy-lidded eyes are deep- set, there are faint bags beneath them, the mouth is turned down at the corners. His son’s image is, if not identical, then certainly comparable. The similarity of the two kings' official images might suggest a similarity in their approach to government. It also suggests that Amenemhat is keen to link himself to his illustrious predecessor.

Many statues survive from the prosperous reigns of these two kings, who both built extensively. Many of these images would have been placed in temples, reminders of the important role the king played in Egyptian religion. But they were also instrumental in consolidating earthly power. Senwosret III’s 39-year reign saw a complete reorganisation of Egypt’s internal administration to secure his own absolute authority as monarch. The political power of important families in the provinces was reduced. Perhaps this new way of representing the king, which was followed by his son, underlined the new political order.

The head of Amenemhat III was found in rather unusual circumstances by Lord Grenfell, who was commander-in-chief of the British garrison in Egypt between 1882 and 1892. A keen Egyptophile, Grenfell unearthed this fragment of a royal statue in the unlikely context of a private tomb. It is thought that it might have been accidentally deposited there when the tomb was robbed, either in antiquity or in modern times.

Head of king Amenemhet III, wearing nemes headdress. Only the shoulders and head are preserved; the base is modern. The statue was found in a private tomb. The facial features are a softer version of the so-called 'realistic portraits' of Senusret III. In this way the ruler was able to promote a visual link to his predecessor.

Relief of the Heretic King Akhenaten 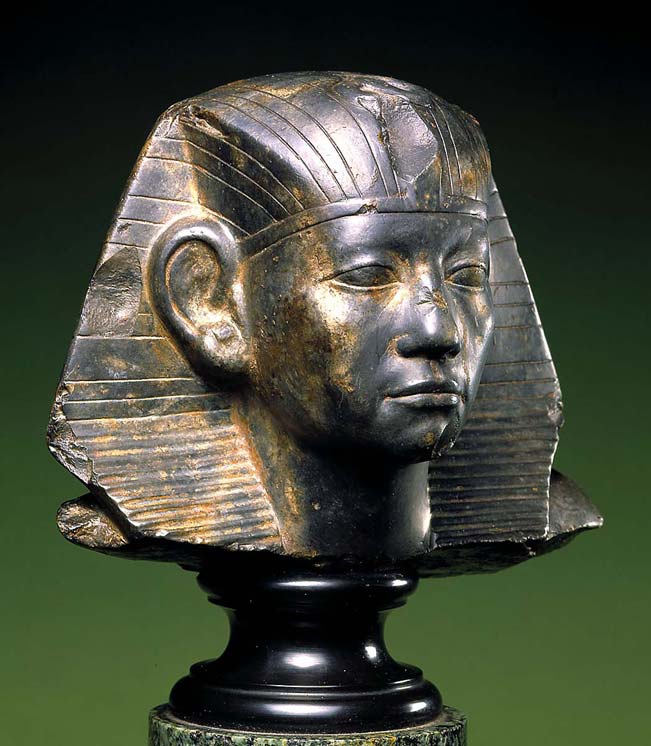