In 1823, the University acquired a plot of land from Peterhouse (the oldest College in Cambridge) on which to build the Fitzwilliam Museum. Eleven years later, in 1834, it held a competition to select the architect to design the new building. Many different designs, plans and models were submitted in a variety of architectural styles and debates ensued as to which was the best and most appropriate. In late 1835, a design in the Neoclassical style by George Basevi (1794–1845), a pupil of Sir John Soane, was selected as the winner. Although he did not live to see the building completed, it is generally reckoned to be his masterpiece, and perhaps the fullest realisation of Soane’s ideal of the creation of contemporary public architecture inspired by that of ancient Rome. The foundation stone of the new Museum was laid on 2 November 1837. Basevi’s grandiose design envisaged the Fitzwilliam Museum as a place dedicated to the arts and learning and was therefore based on the temples of ancient Greece and Rome: a building with a great Corinthian portico set on a high plinth approached by a flight of steps.

Basevi died suddenly, falling through an opening in the floor of the west tower of Ely Cathedral in 1845, and the Entrance Hall remained unfinished and undecorated when the Museum first opened to the public in 1848, with visitors instead having to enter via the basement. Following Basevi’s death, Charles Robert Cockerell (1788–1863) was appointed as the new architect to see the complex project through.

Cockerell proposed a central ascending staircase flanked by two descending staircases. He also conceived the central dome and the treatment of the ceiling, replacing Basevi’s relatively austere treatment with richly modelled ornament. The Hall was finally completed in 1875, under the architect Edward Middleton Barry (1830–80). His plan increased the amount of light and space, laid the mosaic pavements and the installed the more elaborate door surrounds.

Architectural and sculptural decorations and use of colour Barry’s use of lavish, costly materials and bright colours (polychromy) is very much in keeping with earlier suggestions. The combination of mosaic floors, marble and granite columns and decorative facings — yellow Siena for the handrails, pinkish Devon for balustrades and panels, green Genoa for the lower pillars and Aberdeen granite for the great columns above — painted and gilded plaster, and painted glass produces a breathtakingly rich and colourful effect.

The architectural space is enriched by sculpture. The doorway into Gallery 3 is flanked by a pair of classically-inspired caryatids (sculpted female figures that act as supports), the one on the left holding a pitcher in her outer hand, the one on the right a wreath. These are copies of the Caryatids of the Erechtheion, an ancient Greek temple on the north side of the Acropolis of Athens; they were carved in white Tuscan marble by Edward William Wyon (1811–85) in 1874. Above this central door is a magnificent representation of the coat-of-arms of Viscount Fitzwilliam crowned by a coronet and set within a luxuriant laurel wreath, surmounted by plumes. The arms stand on the Fitzwilliam family’s Latin motto ‘DEO ADJUVANTE NON TIMENDUM’ (which may be translated as ‘With God assisting we must not fear’) and are flanked by two ostriches with golden horseshoes in their beaks, symbolising the historic belief that ostriches had powerful digestive powers and could survive eating only iron.

Above the side doorways are the arms of Cambridge University decorated with large cornucopia filled with fruit; and above the entrance door is a Latin inscription commemorating Richard, Viscount Fitzwilliam’s foundation of the Museum in 1816. The central dome is supported on the heads of bearded and muscular male herms (a type of classical sculpture with a torso or head attached to a square or tapering base) with gilded laurel wreaths.

Over the decades, accumulated dust and dirt had obscured much of the colour and quality of the sculptural and architectural details but the recent conservation project (summer 2017 to summer 2018) has revealed the original polychromy and crispness of the tooling. In its pristine state, the Entrance Hall at the Fitzwilliam Museum is one of the finest and best preserved Victorian interiors anywhere in the world.

The upper part of the walls of the Founder’s Landing is dominated by twelve niches, which were part of Basevi’s original conception. These are filled with reproductions in cast plaster of eleven famous antique statues and one by the Italian Neoclassical sculptor, Antonio Canova (1757–1822). Casts of the most admired masterpieces of antique and post-Classical sculpture had been collected since the mid-16th century all over Europe. The collecting of plaster reproductions reached its height during the second half of the 19th century. It became customary for museums to display casts, often alongside original pieces, as the best examples of good design and taste to be studied, drawn and admired. Market demand resulted in the establishment of many specialist cast manufacturers, the majority in Italy, such as the Florence-based firm of Oronzio Lelli. Other Italians established businesses in London, most notably Giovanni Franchi and Domenico Brucciani (1815–80), a native of Lucca, Italy, whose firm is responsible for eight of the casts here. Brucciani had established his Gallery of Casts in Covent Garden by 1837 and from 1841 he supplied many casts for the Cast Courts of the Victoria and Albert Museum (then known as the Architectural Courts of the South Kensington Museum), which took over the Brucciani business in 1922, when it was close to collapse due to decline in demand. Regrettably, many museum collections of plaster casts were destroyed or broken up in the first half of the 20th century, when their value was questioned and they were regarded as inferior substitutes for the originals. Nowadays they are properly understood as excellent examples of the artistic taste of Victorian curators and audiences.

Although the Fitzwilliam Museum gave away many of its casts to the University’s Museum of Classical Archaeology, it did retain the twelve plaster reproductions in the Founder’s Entrance. Four of these were presented in 1849 — three by P. Maud and one by P.B. Duncan — and the remaining eight, all produced by the Brucciani firm, were presented in 1891 by Samuel Sanders, of Trinity College. Sanders, who died in 1894, was a great benefactor of the Fitzwilliam Museum and of the University Library.

Plaster casts are created using piece-moulds: individual moulds taken from each part of the original sculpture are filled with liquid plaster and allowed to set, and are then conjoined to recreate the original. These piece-moulds could be re-used, permitting multiple copies of the same sculpture to be cast. With the aid of a ‘reducing machine’ it was possible to make casts in a range of sizes and to reproduce details of the original.

3D scans of objects in gallery

A detail of the ceiling of the Founder's entrance 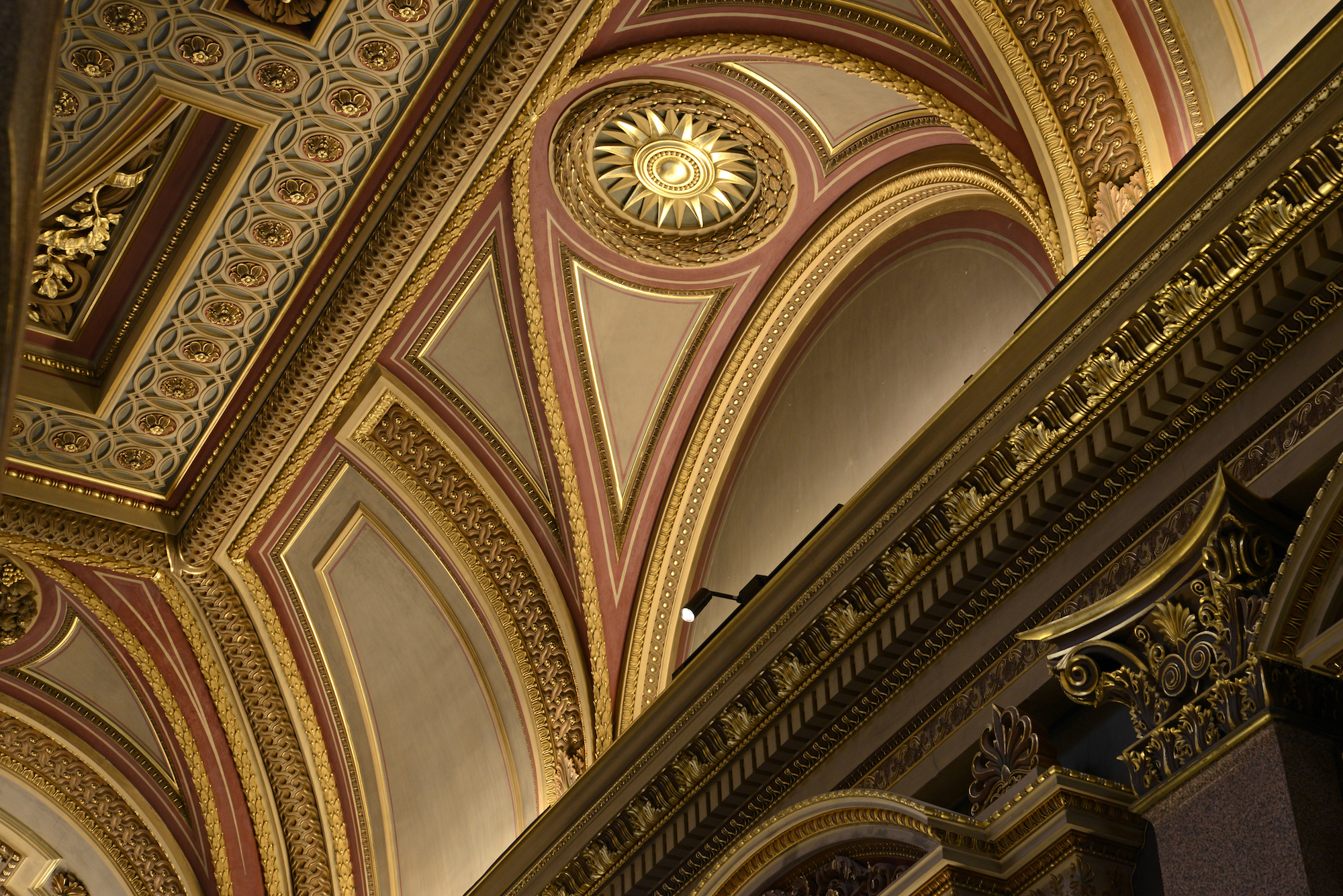